This way to the pain

Lauryn Hill. There’s a beautiful picture of her on the mirror next to me as I prepare to get my hair put in to dreadlocks in a little salon behind the city centre in Kigali. There’s also about a 100 other styles of dread locks available – bee hive dreadlocks, dreads and braids combo, Mohawk dreads. Best case I get hair that channels Lauryn Hill. Worst case I look like a Sri Lankan Coolio. 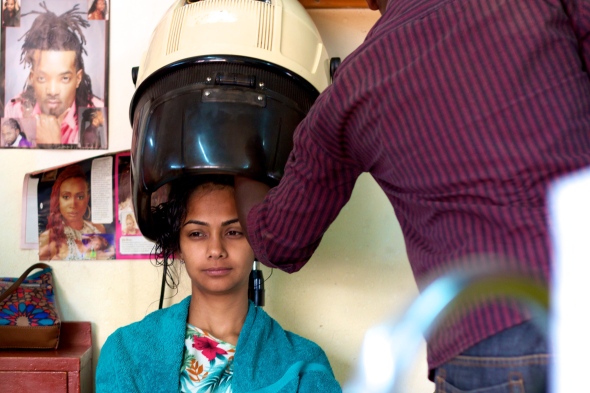 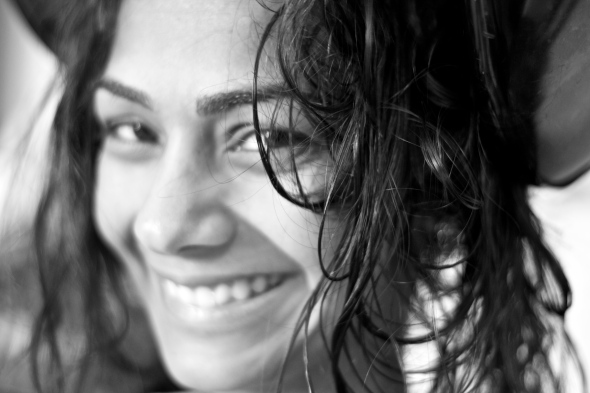 There are three people working on my hair. They take a little chunk of hair, back-comb it, twirl it, tie a not at the top, twist some more, tie a not at the bottom, stab at it with a metal crochet hook and pull in any loose strands. A few dreadlocks down, I’m feeling pretty good about this. I look over and smile at Betty, who is my friend and the one initiating me into the world of African hairstyles. 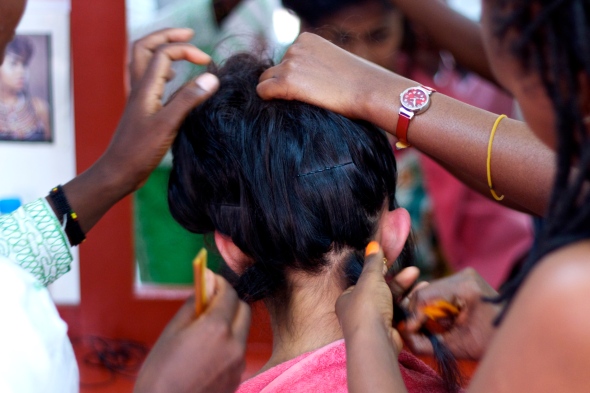 There’s lots of activity around me at the hairdressers. Laughing, chit-chatting in Kinyarwanda. I imagine the conversations they have about their children, Rwandan celebrities and how men just don’t listen.

Just smile and deal with it

Break time. My scalp is starting to hurt, so I’m relieved that two of the ladies have gone out to grab some lunch. Having your hair pulled in three different directions starts to take a toll. I get a piece of maze to munch on, it’s like the poor man’s corn – not juicy, starchy and a bit tasteless.

They’ve completed half my head and my scalp will never forgive me. A guy substitutes in for one of the ladies and his backcombing technique is the worst, I wince in pain and Betty tells me “Don’t worry they are toughening you up, this way child birth will be easier.” 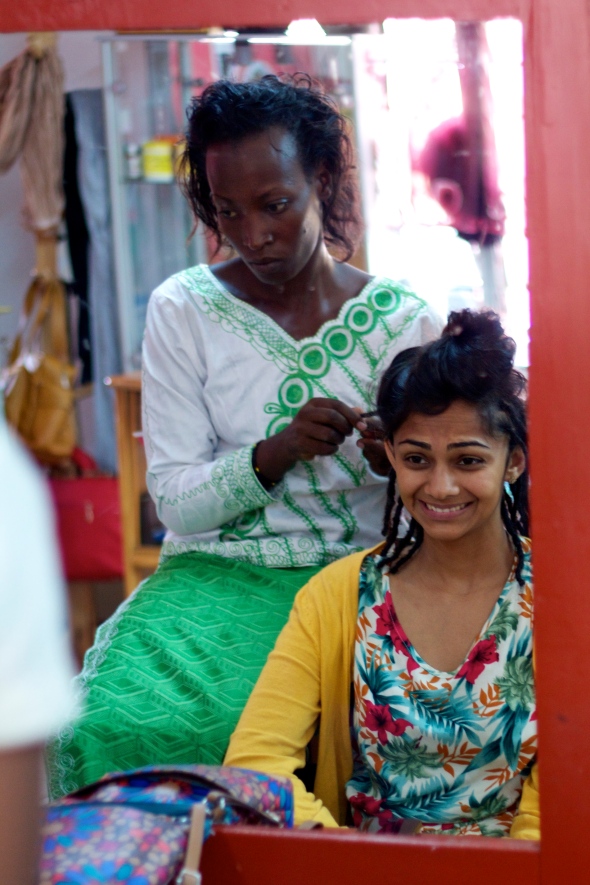 It hurts incredibly. I go to the bathroom and then contemplate making a run for it. I try to convince myself that I could just have half-a-head of dreadlocks and be really hipster. Betty ushers me back to my seat. I’m pretty sure the UN have passed a resolution about dreadlocking as a form of torture.

The music on the TV is starting to reverberate in my sore head. It’s like Rwandan Idol, but exclusively with Christian songs praising Jesus. The hairdressers start singing along too. Who are these lyrical sadists and why am I paying for them to do this. Betty tries to motivate me by saying ‘This is the price for beauty’. My jaw hurts from clenching. Why do I have so much god damn hair?

I’m exhausted but it’s done. Betty says “You look like a rasta girl! I didn’t want to tell you how much it hurts because otherwise I didn’t think you would do it”.

The hairdresser gives me a series of instructions about maintaining dreads. Sleeping with a net to protect it. Buying gel to style it. Coming in every 3 weeks to get the dreads redone and washed. I ignore her advice, because obviously I know best. All I can hear is my heart pulsing in my scalp.

My scalp has recovered. I’ve finally stopped freaking out that a ferret has brushed passed the back of my neck. I probably needed that hair net because the dreads are becoming loser. Dreadlocks you were my Everest.

The pain never ends, I’m back every few weeks for at least 2 hours to get them repaired. What have I done to deserve this misery????

18 Feb This entry was published on February 18, 2015 at 2:19 pm. It’s filed under Photography, Travel and tagged africa, dreadlocks, dreads, hair, haircut, kigali, Photography, Rwanda. Bookmark the permalink. Follow any comments here with the RSS feed for this post.