My hair was looking a bit shabby so I decided to pay a visit to one of the local barbers. Our suburb boasts many fine establishments for one to have a “fight with the lawn mower” so I based my search on 3 highly sophisticated criteria:

After assessing the options, I chose ‘Denial Salon’ or possibly ‘Deneal’, it had both alternate spellings on the roof and window (a classic advertising ploy to get a bit of buzz about your business). ‘Denial’ also purported to operate as a Saloon, but I was disappointed to not find any bourbon inside. Denial’ is endorsed by American celebrities – Andy Roddick and Hillary Duff – undoubtedly renowned as fashion trailblazers who have reached cult status with their iconic hair. With its hyper colour signage, ‘Denial’ is chic smart and sophisticated – for here.

Upon walking into ‘Denial’, I was immediately overpowered by a haze of menthol vapour that was so potent it left me weeping and virtually immobile. I think they run eucalyptus oil through the vents. After coming to, I watched patiently as another customer received the ‘Denial Special’ – which can only be described as a sensual ayurvedic massage/haircut: his head was completely covered in oil and the barber caressed his face whilst cutting his hair. When this ancient ritual finished it was my turn to be treated by the hands of V.V.S. Kuthasingarawera (Vanting to be Vidal Sassoon) – or that’s what I imagine his name to be. 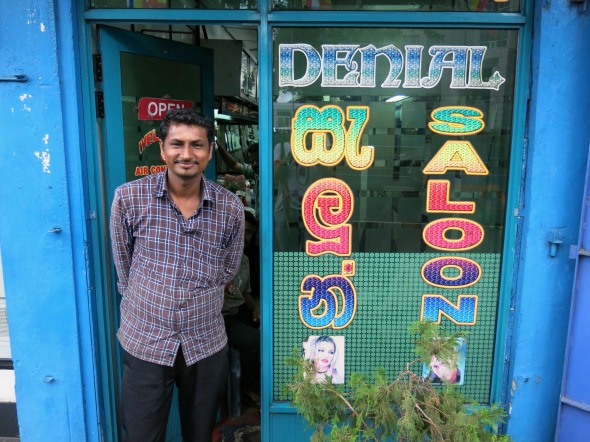 I sat down and told V.V.S I wanted my head shaved. Looking back at him through the menthol-frosted mirror, I immediately saw his disappointment; a simple shave was a major let down. He tried to convince me that he was capable of so much more, as per the pictures of models with quiffs, side-parts, mop-tops and undercuts collaged across the walls. As I was steadfast in my conviction, V.V.S dolefully picked up the clippers, blew off the old hair and began to work. After he gave me the once over, he pulled out his pair of orange craft scissors and began to snip away at the pesky bits and asked one last time if I was sure I didn’t want a Sri Lankan flag shaved into the back of my head. I kindly refused and he dusted me down with the broom that also doubled as the bench sweeper and told me that the price for his craftsmanship was 130 rupees, or $1.10. I gave him 140 (big tipper) and bid V.V.S and ‘Denial’ adieu.

03 Jun This entry was published on June 3, 2013 at 2:46 pm. It’s filed under Travel and tagged haircut, Sri Lanka, Travel. Bookmark the permalink. Follow any comments here with the RSS feed for this post.

One thought on “Haircut”