Some cities have seagulls, some have pigeons. Seagulls are mentally deranged but at least they present well in their navy whites. Pigeons waddle around like a pack of old nannas in cardies who can’t remember where they left the chutney.  Colombo on the other hand has crows. It really got the booby prize in the bird lotto. Crows don’t get a good run throughout literature with their role primarily being that of the harbingers of death and misery. I suppose it doesn’t really work to imagine Cinderella twirling around while a pair of blushing crows spin her a new gown. They would be more likely to beat her up and make off with her remaining shoe. Come to think of it a group of them is called a murder. Enough said. 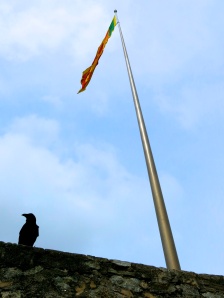 13 May This entry was published on May 13, 2013 at 5:07 pm. It’s filed under Photography, Travel and tagged crow, Photography, Sri Lanka, Travel. Bookmark the permalink. Follow any comments here with the RSS feed for this post.

One thought on “Crows”